Training for a marathon (26.2 miles) takes approximately 414.56 miles, and 3,760:22 minutes or 62:40:22 hours of training. That is 2 days 14 hours 40 minutes and 22 seconds of running! AND I only accomplished 82% of my runs. Imagine the count had I not had my winter cold, taken time to deal with plantar fasciitis, or skipped others runs due to sheer lack of time in my busy life.
I dedicated 18 weekends to run between 8 and 20 miles. I traveled 30 minutes each way to meet my BRF (Best Running Friend) Emily, who by the way has 3 kids, is a full time teacher, and accomplished more than 90% of her runs! The time suck of training for a marathon comes down to just one morning to prove to yourself it was all worth it. My time goal of 26.2 miles under 4 hours was at stake!
Many know how it already went, as the LA Marathon was in March. Unseasonal high temps bombed everyone in southern California race week. Racers anxiously watched the daily weather updates, hydrated until they peed the perfect shade of yellow, and ran in high 80 degree temps in the hopes that they could squeeze some acclimation into their bodies. I followed all the rules that week, but when the race started that morning at 6:30am it was already 70 degrees and climbing.
I prepared myself to run alone the whole race. Emily and I had been separated by 2 corral groups, and I was mixed in with the official under 4 hour pacer. At the last minute my nerves got to me, and I moved back to where Emily was, knowing I’d do better with her by my side. The corrals closed 30 minutes before the race, people were jumping over the 8 foot fences like a zombie apocalypse movie, and others were peeing in the bushes nearby after hydrating like crazy. OK, that was us peeing in the bushes. I don’t condone this, kids, but it happened. After officials removed the corral barricades we bobbed and weaved like jack rabbits through the masses until we reached our pacer. We were set and psyched!
I wish I had more climax to report, but the kick off to the race was pretty fantastically dramatic. We started right next to the group of runners that have participated in all 30 LA Marathons. Some of them in their 70’s by now! I missed my brother at water station 7, and almost lost it to tears. I guzzled down 2 bottles of water at least along the way, and a Dixie cup of Gatorade and/or water every other mile. I munched on free food from the crowd all the way, and I lost Emily about half way through. I think we switched back and forth on the lead for a bit, but nearing mile 20 she was ahead. The 4 hour pace group passed me somewhere in mile 19, and I began to sob. I felt my body breaking down, and knew my goal was too dangerous to achieve at this point. The weather was nearing 90 degrees. I set my sights lower, and safer, and by this point I still believed I could at least PR from my last race time of 4:38:56.
The next 3 miles were torture. I began to slow until I could no longer run. I realized the last 3 would have to be trotted and walked. At one point I sat down on a curb and sobbed through my labored and shallow breathes. I knew I had to finish or I would let myself down even further. Those 18 weeks of training had to count for something. Dizzy or not I was going to cross that line, as long as I didn’t start vomiting or worse. Miles 24 and 25 were the most heartbreaking. I walked the entire last 2, saving all I had left to trot across the finish. By then it was well over 90 degrees, I had called my husband Louie with the bad news and for a pep talk, and then I crossed over at 4:38:32. An attendee helped me get my medal and walked me to the first aid tent. I cried and cried, but hardly any tears came, I was that dehydrated. Luckily, I never ended up on a stretcher with an IV in my arm, but the devastation weighed heavy.

It has taken me some time to get over this event, and get back on that running horse. I injured my right foot that day, and lay off for a month to recover. I raised $1,273 for my charity, Angel City Pit Bulls, and this was by far the best consolation prize! The thought of signing up for the 2016 LA Marathon is far from my mind at this point. After my first marathon, and that 26.2 bug bit me, I told myself it would be great to run a different race every year. Although now I feel attached to my charity group, and an inner obligation to go back to LA and kick it’s @$$! I never want to train 18 weeks again. My husband misses me and I miss rock climbing, which always takes a back seat during this strenuous time. To better prepare myself I made a new plan and set healthier goals for the rest of 2015. 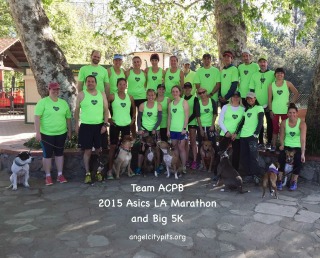 1. Run because it’s healthy for you physically and mentally. Running is how I take the edge off from my overly busy, self employed, business owning life. I’m a much better person after 3 miles of pounding on the pavement and trails. The cardio additionally benefits my endurance for climbing, especially on rope. Which leads nicely into goal number…
2. Climb because it’s your passion, and the passion you share with your husband. Back to that 62 hours and 40 minutes of training stat I mentioned earlier, marathon training takes too much time out of my marriage and away from my husband, who is not a runner. He may support my cause, but he misses me and our climbing adventures. We planned a trip to Spain this year, and my new mantra has been #trainforspain. To prepare for this I have begun rope climbing once a week, running 3 times a week, and cross/weight training once a week. If I can fit in a good bouldering session I’m lucky, but as we near closer to our October trip I’ll be on ropes more anyway.
3. Be more adventurous than ever. Last year my husband and I didn’t travel much at all. On January 1st, 2015 we opened the calendar and set a camping/climbing/vacation destination for every month. Then we paid for them all. A little hiccup happened when Louie broke his arm, but we are still on board for the rest of the year. Our first big trip will be in June to Maple Canyon Utah for rope climbing (#trainforspain), and the beginning of goal number…
4. Run a half marathon every place you travel to this year. I had to search many different race calendars online, but I’m now signed up for the Utah Valley Half Marathon in Provo to kick off this goal. I have my sights on 3 more races this year, and the light at the end of the tunnel is still the 2016 LA Marathon. I want to raise my charity goal to $2,000 and officially beat my time from this year’s race with a PR under 4 hours. I’ll also be able to train for it in less time with so many miles already on my side from those half’s I will have run. It’s a win, win, win really!
If you’ve made it this far into this blog entry, high five to you! Thanks for reading, especially my goal section. And feel free to kick me in the pants if you feel I’m slacking or need some encouragement. I like chocolate and hugs.
Stay Adventurous,
Valarie Tes 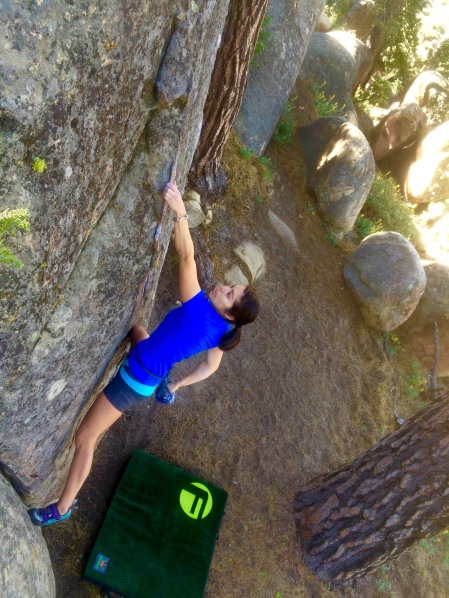 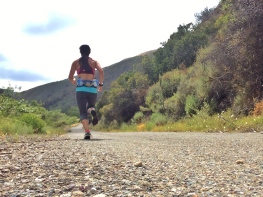 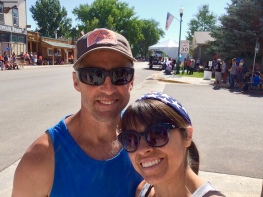 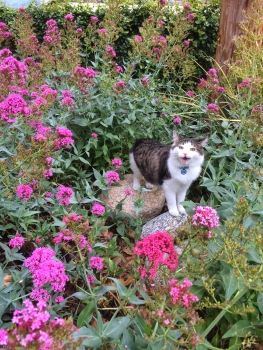 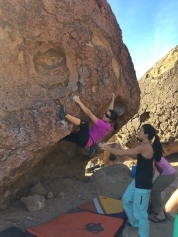 Just being a yogini

Ready to run with mom 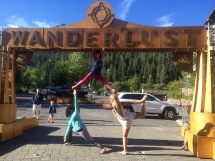 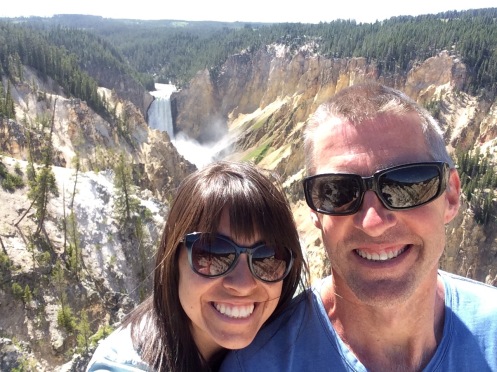 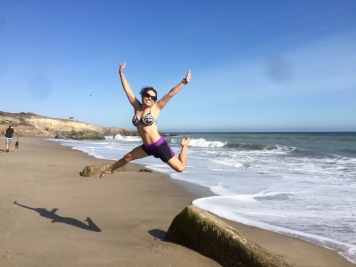 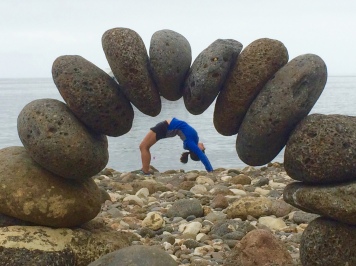 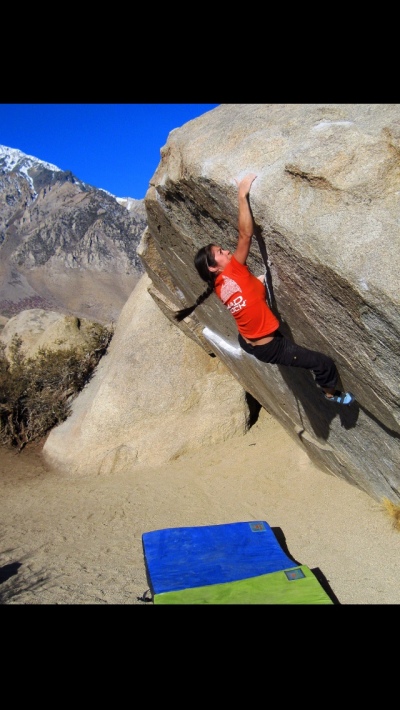 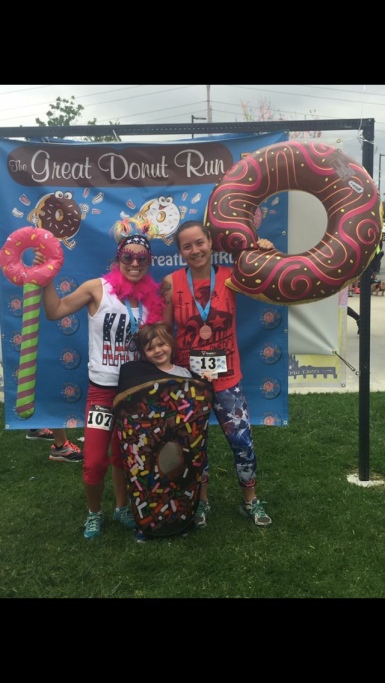 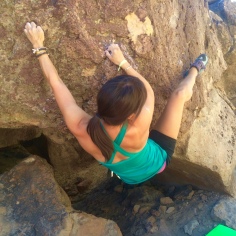 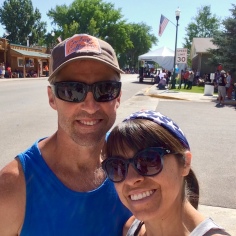 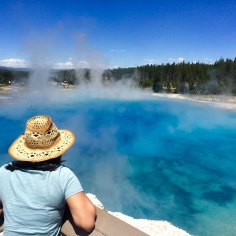 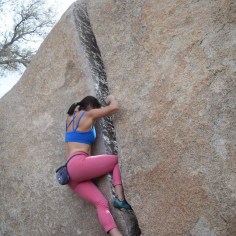